We got a new book ‘No-bot the robot’ in our preschool donated by a past pupil. All the children loved to listen to the story and look at the pictures. When reading the book Eva suggested that “we could make a robot”.

The teacher Mena asked Eva, “how do we make a robot?”. She replied, “with paper and a box, and sellotape”. All the children gathered materials from home and school to make the robot. 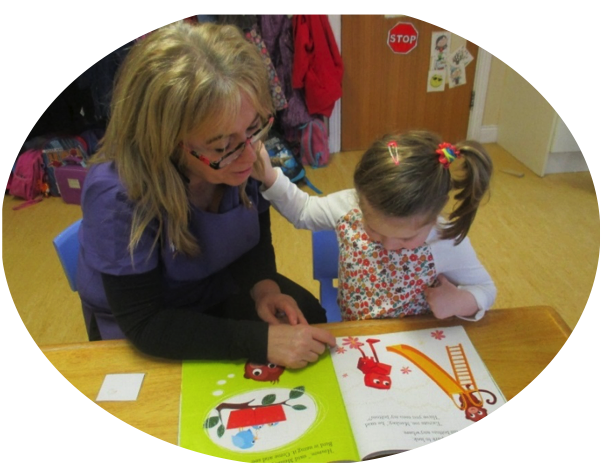 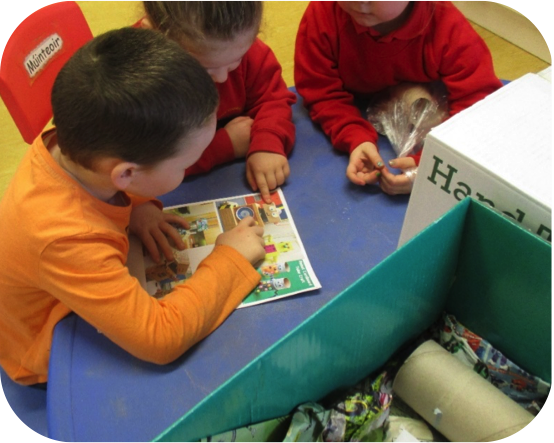 Danny and Eva decided what their robot would look like from samples printed from the internet. Danny excitedly said ‘we can do it like a square’, Eva proposed ‘we can put a face to it’.

Eva, Samuel and Lauren started by cutting and tearing paper and sticking it to the box with glue. Lauren specified she ‘will tear the paper’. 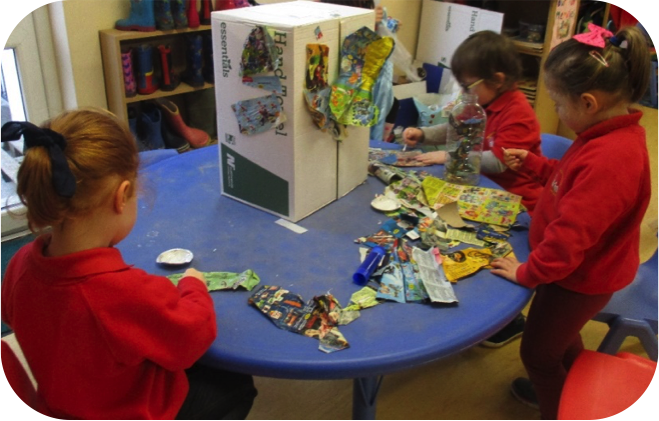 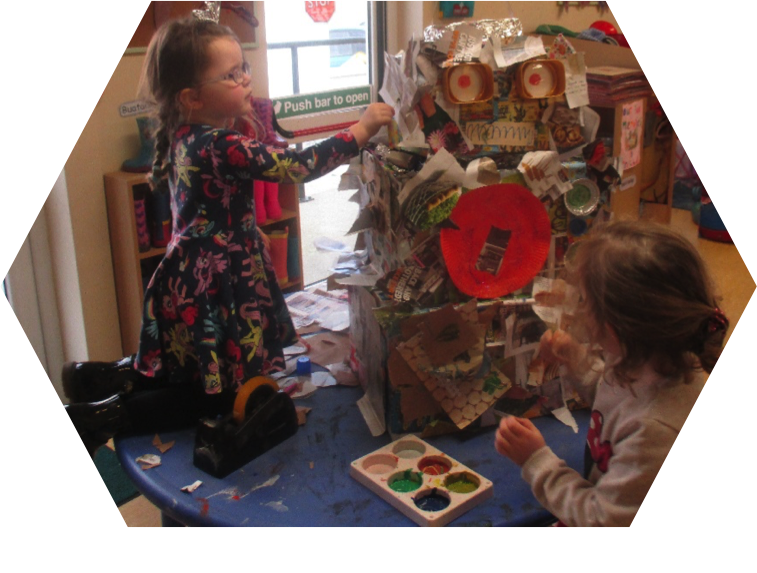 When Kiera, Samuel, Emma, Eva and Mae were finished sticking and making the robot (with a little help from teacher Angie with the hard to stick materials), they decided to paint the box. Kiera grabbed the paint from the shelf. Eva, Eva and Samuel simultaneously specified the colours ‘red, green and yellow’. They all picked various colours.

Eva, Samuel and Lauren started by cutting and tearing paper and sticking it to the box with glue. Lauren specified she ‘will tear the paper’. 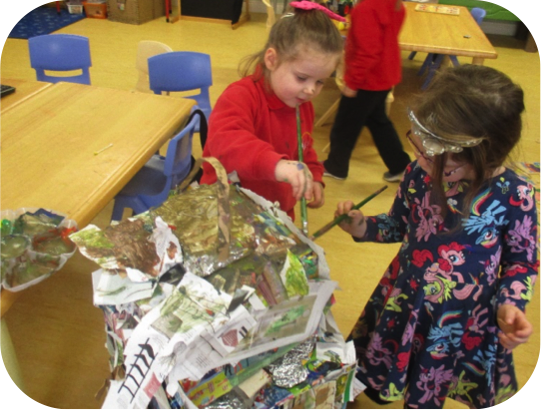 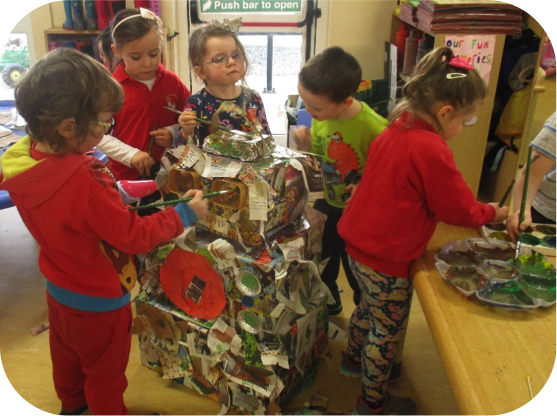 Eva enthusiastically directed that "we will paint all of the robot!" 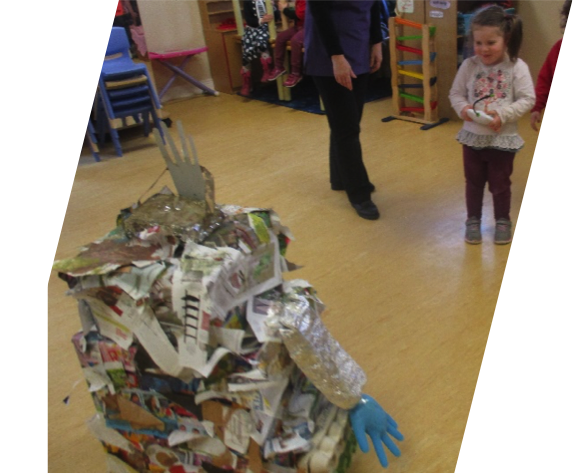 When Samuel’s Daddy saw the robot, he had an idea. He happened to have a motor base on wheels. The next day he brought in a base and a remote control for our robot. We attached it to the robot, and everybody shared and took turns.

The children excitedly played with the robot, ‘Cool’, ‘ahh it moves’, ‘ahh he’s coming after me!’

The children called their new robot ‘No-bot’, just like their book. 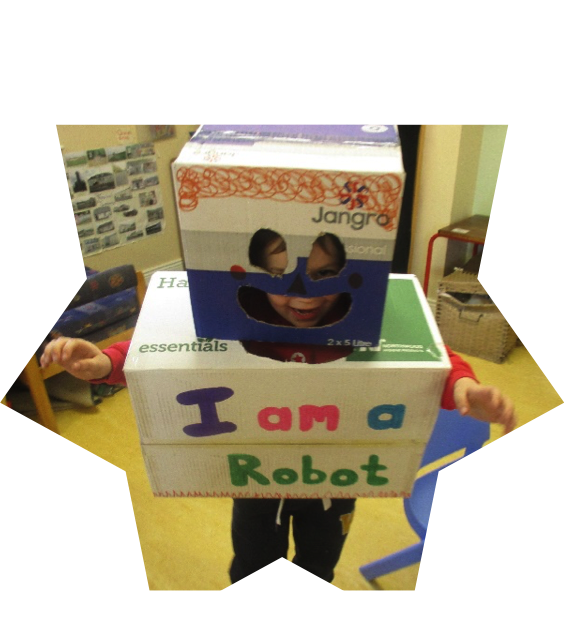 Bryan wondered ‘can I be a robot?’. 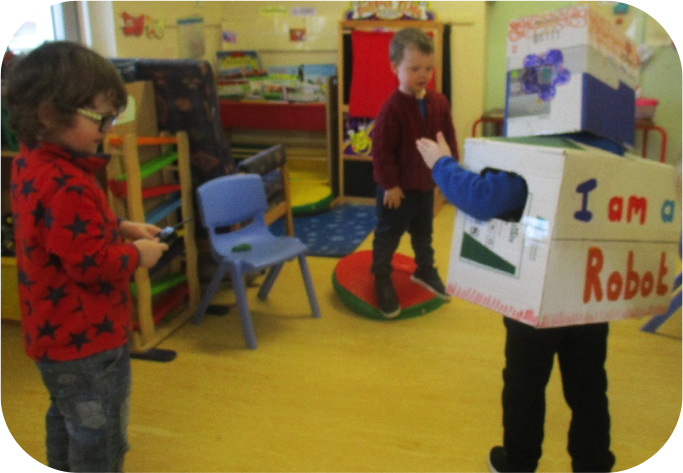 The children have developed a broad range of abilities and interests throughout this project. They used skills such negotiation, imagination and decision making.

The children developed their communication skills by using language to interact with each other by listening, discussing and taking turns. They explored patterns and expressed themselves creatively by practising skills such as cutting, gluing, painting and building.

The children’s sense of identity and belonging both individually and as a group was promoted through expressing their own ideas, having them acknowledged and accepted by their peers. Eva’s idea was taken on by all the children in the room and they spent time discussing, developing and deciding how they would go about making their robot.

The project was developed further by the use of the extra boxes to extend and enhance the learning experience. This extended further again when Samuel decided to make a toy remote to move Paddy around the room as a robot.

We placed the robot in the hallway for all our parents to see as we are keen to share children’s learning and creations throughout the year. When in the hallway they can continuously see it and reflect on it with their parents.